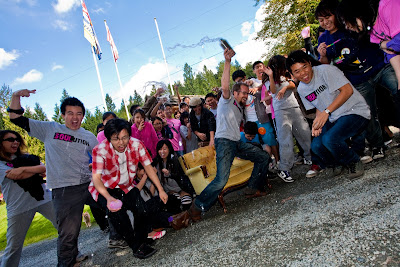 Please read Numbers 1 and listen to what the Lord Jesus Christ would like to tell you before reading my Spiritual Journal below. If you would like to learn a simple and good way of Daily Devotion method please read my “Count Down 5” from this blog. You may click this link directly for the method:Subject Shifting Devotion.pdf. (You may begin with a song to praise the Lord and complete you devotion by singing another praise song.)

Please click this link to worship with us - Day of Elijah

"The Israelites are to set up their tents by divisions, each man in his own camp under his own standard." Numbers 1: 52

My son came back from our youth leaders meeting tonight and said, "Dad, it's OK now. We are all fired up after the Gospel Camp. We are ready!" Wow! How joyful it is for a rector to know that a large group of his young leaders are ready to "fire Up" and "rise up" to lead other young people to Jesus! The Lord helped me to see a picture of soldiers to fall in to a military formation. "Are you ready?" "Yes Sir, Aye Aye Sir!"

I think you must have left Egypt long time ago unless you have gone back there. But my question is: are you in the Promised Land? Or you have been stuck for quite a while and still in the desert wandering around? We are called as disciples of Christ leading people into the Promised Land. We really need to follow God's pattern and ways to the Israelites to "set up our tents by divisions" which means you need to be in a small group, a place in which the Lord prepares for you in His vast army. "Each man in his own camp under his own standard" which means you need to find your own position to serve and fight this severe spiritual warfare for Jesus. It's better for you to know and fall in as a good soldier of Christ sooner than later!

Prepare us for the triumphal march to the Promised Land. In Jesus' name I pray. Amen.

See how our young people have been "fire Up" and ready to "Rise Up"!

My son, Ignatius, completed his three weeks mission in Ethiopia a few days ago.We are so joyful to welcome him home and know that he experienced God mightily in that three weeks. His one word of experience is "JOY"! Please click this link to read his wonderful sharing:http://21ethiopiandays.wordpress.com/

Please click this new link to watch Athanasius' violin recital(June 7, 2010) with me playing the piano:

Pray for one ACiC/AI church one day at a time

Face book version: http://www.facebook.com/silastyng?ref=profile
Twitter version: http://twitter.com/bishopsilasng
Welcome! The purpose of this blog is to encourage Christians to have daily devotion - a wonderful and intimate time with Jesus.
There are three reasons for you to use this blog as your daily devotion:
1. A healthy spiritual diet - One chapter of the Bible daily. We really need at least one chapter of Bible daily so that we are well fed.
2. A good example of Spiritual Journaling - What I have committed for 1,189 days(the Bible has 1,189 chapters)to write this daily post is not for teaching purposes but this is my daily spiritual journal - I write down what I hear from Jesus and how I experience His intimate relationship with me each day. I have launched a wide-spectrum research on daily devotion and have found out that there are less than 10% of Christians that are having daily devotion. Out of that 10%, many having daily devotion are doing so because of guilt (they know that they are Christians and need to have daily devotion and feel guilty if they don’t do that), duty (they need to fulfill their duty as a Christian) or study(lots of Christians primarily use their daily devotion as a time to study the Bible). I do pray and hope that you will make up your mind to have a relational daily devotion so that you can have an intimate time with Jesus. I pray that you will write your own spiritual journal as well.
3. An online discipler – One of the reasons that so many Christians do not have daily devotion is because they do not have a discipler. A discipler can help them build up this basic element of discipleship when they first become Christians. The best way for you is to have a discipler to walk with you for a certain period of time so that daily devotion become a good habit. Or, you may have a small group of two to three people to encourage and be accountable to each other so that you won’t stop your daily devotion. I offer myself as your online discipler to walk with you daily to enrich your spiritual journey. So, shall we start this journey with Jesus Christ our Lord now!
Posted by The Rt. Rev. Dr. Silas Ng at 1:21 AM